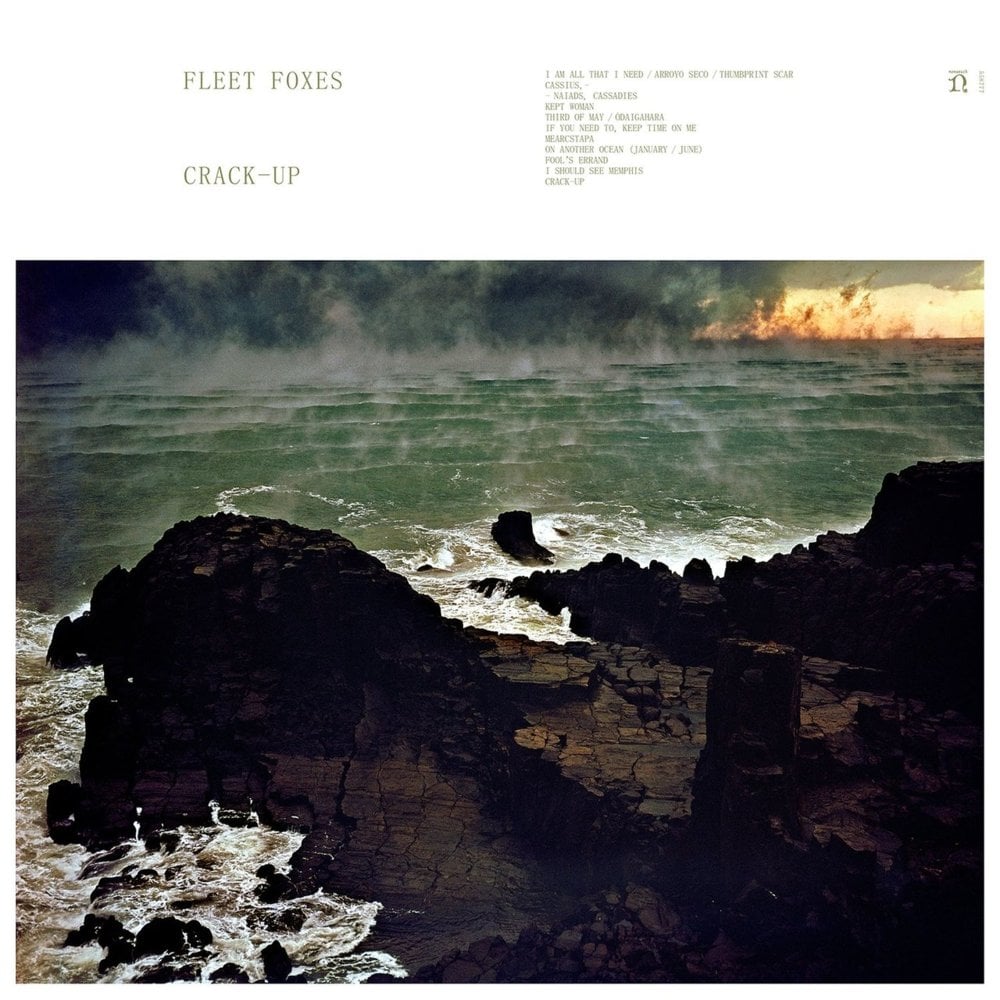 Fleet Foxes’ Crack-up begins in isolation. Frontman Robin Pecknold opens the record whispering, “I am all that I need” accompanied only by a similarly hushed guitar. A minute later, Pecknold emerges from the cave and joins his bandmates in a surging, explosive musical return. Kendrick’s “DNA” be damned, “I Am All That I Need / Arroyo Secco / Thumbprint Scar” is the best drop so far of 2017.

Crack-Up is Fleet Foxes’ third album and first in over six years. Their sophomore effort, Helplessness Blues, established the band beyond the late aughts’ realm of indie darlings and folk revivalism. The album eschewed the faerie, bucolic character of their self-titled debut and presented a band that was musically adventurous and existentially apprehensive.

Helplessness Blues’ existential lyrics proved to be accurate; following the album’s tour, Fleet Foxes was quietly placed on hiatus as Pecknold became near hermetic. In the years since, Pecknold enrolled at Columbia, guitarist Skye Skjelset released a handful of experimental noise albums, drummer Josh Tillman famously became Father John Misty, bassist Christian Wargo fronted Poor Moon and The Crystal Skulls, multi-instrumentalist Morgan Henderson released a pair of albums with The Cave Singers, and keyboardist Casey Wescott found himself on several of his bandmates’ projects. But early last year, Pecknold had his much anticipated “Let’s get the band back together” moment. Absent of Father John, Fleet Foxes returned to the studio for their most dynamic and esthetic work yet.

Crack-Up continues Helplessness Blues’ musical and emotional maturity. Sonically, the album emphasizes texture over melody (Pecknold recently stated that “[Avoiding] sing-songy, theatrical melodies” was one inclination for the record). The songs are replete with subtle details that reward repeated listenings and easily make Crack-Up Fleet Foxes’ most atmospheric album. “Mearcstapa” conveys being lost in a sea reminiscent of the Hiroshi Hamaya photo on the album’s cover. The sky clears on the next track as “On Another Ocean (January / July)”’s second half sails on calmer waters. The ending of “I Should See Memphis” finds Pecknold’s voice torn and stretched over acoustic guitar turned desolate noise and recalls Godspeed You! Black Emperor’s bleak aural landscapes.

Helplessness Blues’ exploration of multi part song structures becomes the rule on Crack-Up. Nearly all of the album’s 11 tracks feature segmented songs or contrasting musical elements. “I Am All That I Need / Arroyo Secco / Thumbprint Scar”’s opening dirge returns one line at a time forming a sort of inner dialogue with the more emphatic Pecknold. The record’s nine minute centerpiece and lead single, “Third of May/ Ōdaigahara,” diverges from Crack-Up’s most accessible, welcoming track to staring into a beautiful, ambient abyss. Pecknold cited film director Nicolas Roeg, known for juxtaposing seemingly unrelated scenes to find common relationships between them, as influencing the song structures. It’s these little musical episodes that make listening to Crack-Up so compelling. Yet Fleet Foxes’ understanding of melody and restraint prevent the album’s ambition from growing weary and exhausting.

Pecknold made the most of his humanities studies at Columbia calling upon the American Civil War, Cicero, Grendel, and even Muhammad Ali and using their contexts to help paint his own. The album’s title comes from the F. Scott Fitzgerald essay “The Crack-Up” that sees the writer examine himself and the nearing end of his career. Pecknold connected with Fitzgerald’s disinterest toward his previous self and passions as well as his realization of the necessity to accept and move past one’s existential confusion. Thematically, the record moves from this uncertainty to confidence. You can trace this with Crack-Up’s cover art moving from the murky waves in the bottom left to the glimpse of sunlight in the top right. “I Am All That I Need / Arroyo Secco / Thumbprint Scar” sees Pecknold highlighting his past ignorance in seeing others as characters playing roles “I’ve gone too far to find you/ And the thumbprint scar I let define you/ Was a myth I made you measure up to.” “Cassius, - ” concerns last summer’s police murders of Alton Sterling and Philando Castile and Pecknold’s subsequent involvement in protests, “The song of masses, passing outside/ All inciting the fifth of July/ When guns for hire open fire, blind against the dawn.”

Other tracks hint at political frustration mentioning a “philippic as Cicero” or asking “How could it all fall in one day?” But, for the most part, Crack-Up’s lyrics are ambiguous, and at times opaque. No songs here quite reach emotional directness of Helplessness Blues’ title track. The final track, “Crack-Up,” beautifully merges the political and personal anxieties as Pecknold sings about being engulfed by tides. But this doesn’t reflect a drowning so much as a baptism. Amid a spate of horns, Crack-Up concludes asserting resistance in the face of uncertainty.

With Crack-Up, Fleet Foxes have created both a stunning album and a statement on how folk music can be forward-looking instead of purely nostalgic. It’s dense and overwhelming and commands your attention. Though it may take a few listens, the album’s beauty is richly rewarding. In few years’, time Crack-Up will not just be viewed as a monument of contemporary folk but a current model for musical ambition and accomplishment.